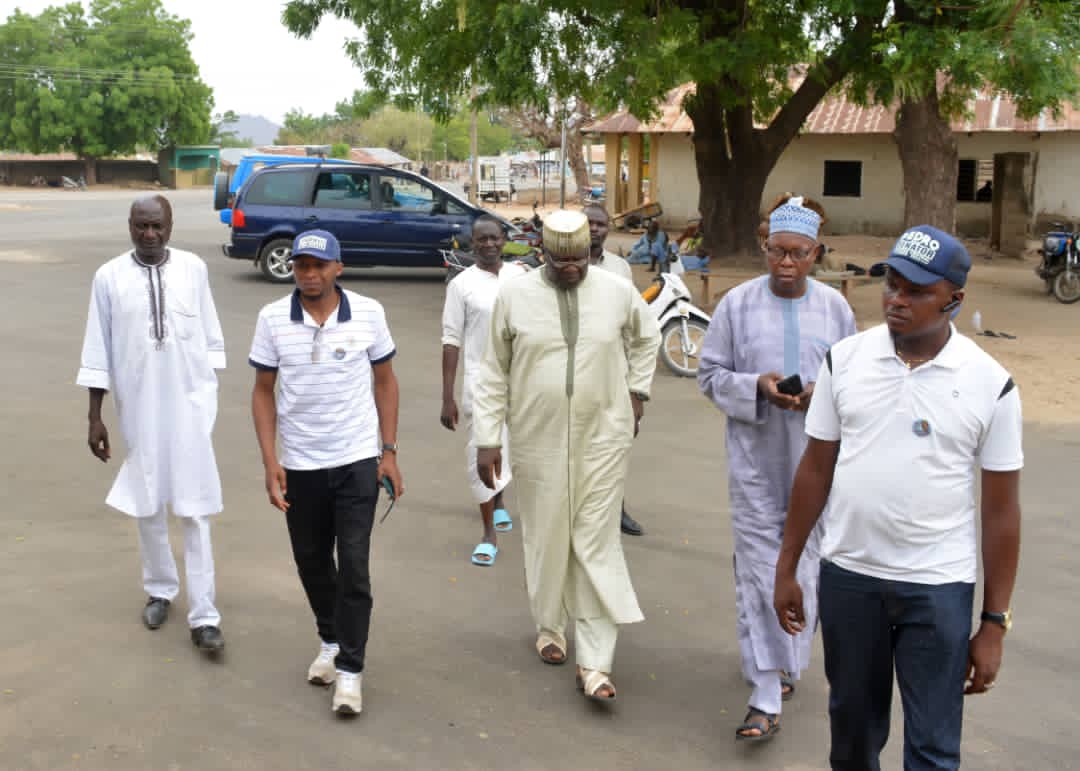 Chief Pedro Ardiyel Dafur yesterday, April 12, 2022 continued his journey of consultative meetings with LGA party executives, critical stakeholders, Coordinators, youths and women.
Arriving KANKE, Chief Dafur was welcomed by the LGA APC chairman, Hon Williams Gombwir who acknowledged that chief Dafur was at home having held series of consultative meetings in the LGA in the recent past. Chief Dafur held another meeting with the Representatives of wards EXCOs and also inaugurated his ward Coordinators.

Arriving Kanam, Chief Pedro Ardiyel Dafur paid a condolence visit to the palace of the Emir of Kanam where he was received by the Wambai KANAM on behalf his Royal Highness, the Emir of KANAM. Chief Dafur thank the Emir for the warm reception and sympathized with the people of KANAM over the unfortunate attack carried out by some terrorist group on the good people of Garga axis. He prayed for the soul of those killed and for the quick healing of those injured. He prayed to God to comfort the bereaved families and for lasting peace within the Local Government area, state and Nigeria at large. The Wanbai thank Chief Dafur for the visit noting that He is the first political aspirant to physically pay such a condolence visit. He wished the aspirant the best of luck as he continues with his consultations.

Chief Pedro Dafur proceeded to the LGA secretariat where he was received by the Executive Chairman of Kanam, Hon. Dayabu Garga who was ably represented by the Secretary of the Local Government council. The chairman prayed for the Senator in making and admonished him to remember Kanam people when he emerges as SENATOR PLATEAU CENTRAL ZONE come 2023 saying that since chief Pedro Ardiyel Dafur is a chartered accountant and a fellow in accountancy he will bring to bear the principles of prudence, accountability and displine which the accountancy profession stands for. He said with these qualities he will be a good representative for central zone.

Chief Pedro Ardiyel Dafur thank the chairman for receiving and giving him the rare opportunity to visit the local government council. He went further to sympathize with the people of KANAM over the unfortunate killings and distruction of property in some parts of the LGA. He condemned in strong terms the unfortunate attack and prayed for the soul’s of the departed to rest in peace with the Lord and for those that lost their belongings that the good Lord will replenish to them back.

Chief Pedro Ardiyel Dafur later met with the legislative arm where the Legislative Leader Hon. Abdulrahaman Bako Councilor Representing Gwamlar Ward assured the Senatorial aspirant of their support in his quest to the Red chambers at the national assembly come 2023.

Similarly, Chief Dafur moved to Kanam LGA APC party office where he met with the LGA party EXCO and Representatives of the 14 Ward EXCOs comprising Chairmen and secretaries. The APC Chairman of Kanam , Mal. Yakubu Usseni Adafa received the Senatorial aspirant alongside the party secretary Barrister Jafar Adamu, party executives of the local government, Chairmen and secretary of all the 14 Wards in Kanam Local Government. A multitude crowd of supporters Men and women who also gathered around the venue chanting and cheering the Aspirant.
Chief Dafur, after a brief introduction of himself charged the party executives to work hard for success of the party at the forthcoming general elections.

The party Chairman, commended Chief Pedro Ardiyel Dafur for offering himself to serve the people of central zone having garnered sufficient experience as a technocrat and community leader.
He noted, “with your experience and exposure of working in diverse works of life both in public and private sector, it is timely to have you as our next SENATOR.”
Chief Dafur later inaugurated his ward coordinators and charged them to work diligently for his success in the forthcoming party primaries and the general election thereafter. The LGA coordinator, Yahuza Bala, on behalf of the Ward coordinators pledged loyalty and promised to do their best for the success of Chief Pedro at all levels of the elections.

Dr. Mazadu Dader Bako, The Most Complete Aspirant for the 2023 Little Rayfield Race