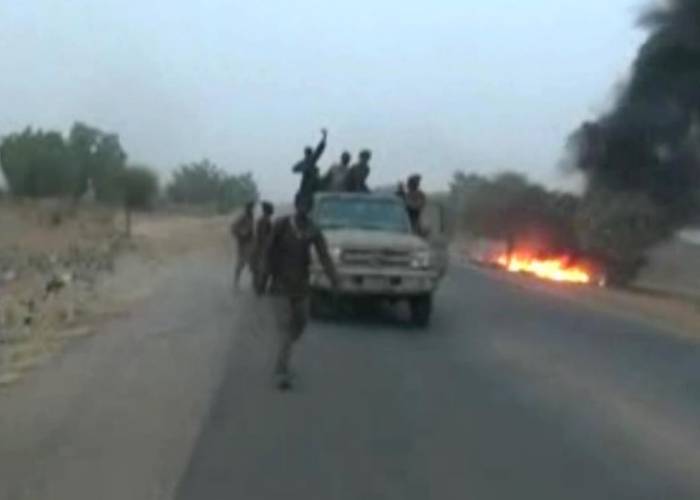 At least 60 persons were killed by Boko Haram and its partner, the Islamic State of West Africa Province, ISWAP, on Saturday, following attacks on communities in Gubio, Monguno, Nganzai, Magumeri and Bama Local Government Areas of Borno State.

It was learned that 20 of the casualties were soldiers but the Military remained silent on its casualties in its reaction to the attacks yesterday, only disclosing that its troops killed 20 of the insurgents and seized their weapons, including Rocket Propelled Grenades, RPGs.

Several civilians were also injured in the attacks, which culminated in the razing of UN Humanitarian office, police station and vehicles in Monguno.

The killings came barely a week after 81 persons were killed in a coordinated attack on Felo, Chingwa and Hoyo communities in Gubio Local Government Area.

A resident, who fled the attack, Mallam Abubakar Liman, said 42 civilians were massacred after clash with the insurgents, and Monguno, where unspecified number of soldiers were killed after the insurgents overwhelmed military checkpoints.

In Gubio, a high ranking politician said the insurgents stormed Felo, Zowo and Chingwa villages at about 11am on Saturday, killing and burning houses, less than 20km drive to the Local Government Headquarters in Gubio.

However, in Monguno, which is the town that hosted tens of thousands of Internally Displaced Persons, IDPs, from Marte, Dikwa, Kukawa and Ngala Local Government Areas, a source said the insurgents attacked the military formation at the outskirts same Saturday, before they infiltrated the heart of the town at about 3:13pm.

The source also said unspecified number of insurgents were killed with assistance from the airstrikes to the ground troops in Monguno.

The source said: “At 15:13 hrs, information received indicated that during the attack in Monguno, one International Non Governmental Organisation’s, Humanitarian Hub, with a total of 59 workers was targeted with one Rocket Propelled Grenade, RPG, fired on the main entrance gate but did not explode, while the main and exit gates were riddled with bullet.

“Three NGO vehicles, parked in front of the hub were burnt down. Threat letters written in Arabic and Hausa languages were dropped in the hub by the attackers. In the letters, the insurgents warned the residents not to work with the military and those they described as Christian westerners in the areas. It took the swift intervention of airstrike forces to repel the attack.”
In Magumeri, it was gathered that some terrorists, armed with AK47 rifles, stormed a local market in Hoyo village and opened fire on buyers and traders, leaving four persons dead, while others sustained gunshots injuries.

Efforts to get confirmation from the Police Public Relations Officer in Borno State, DSP Edet Okon, proved abortive as his cell phone was not reachable at press time.

However, a statement by Army spokesman, Colonel Sagir Musa, yesterday, confirmed the attack in Monguno without giving the number of casualties.

Sagir said: “The Chief of Army Staff, Lt Gen Tukur Yusufu Buratai, has congratulated officers and men of the Army Super Camp, Monguno, for their resilience and bravery in holding and dealing with the members of the BHT/ISWAP group that attacked Monguno town on 13 June 13, 2020.

“The COAS is highly impressed by the high number of casualties inflicted on the insurgents and the number of BHT members and equipment captured or destroyed by the gallant troops with the support of the Air Task Force.

‘’He urged them to remain firm and resolute in containing the threat finally. The COAS further charged the Commander, Operation Lafiya Dole (OPLD) to consistently engage in massive offensive patrols to all identified terrorists’ locations and enclaves.” within the theatre to ensure the terrorists are denied freedom of action and eliminated.

“The COAS uses this opportunity to assure the troops and people of the North West especially Katsina, Sokoto and Zamfara states that he will soon be there to ensure that the madness of the bandits is put in proper check.

“He is also impressed with the performance of the troops in the ongoing operations Accord and Hadarin Daji. He urges them to maintain the momentum.’’