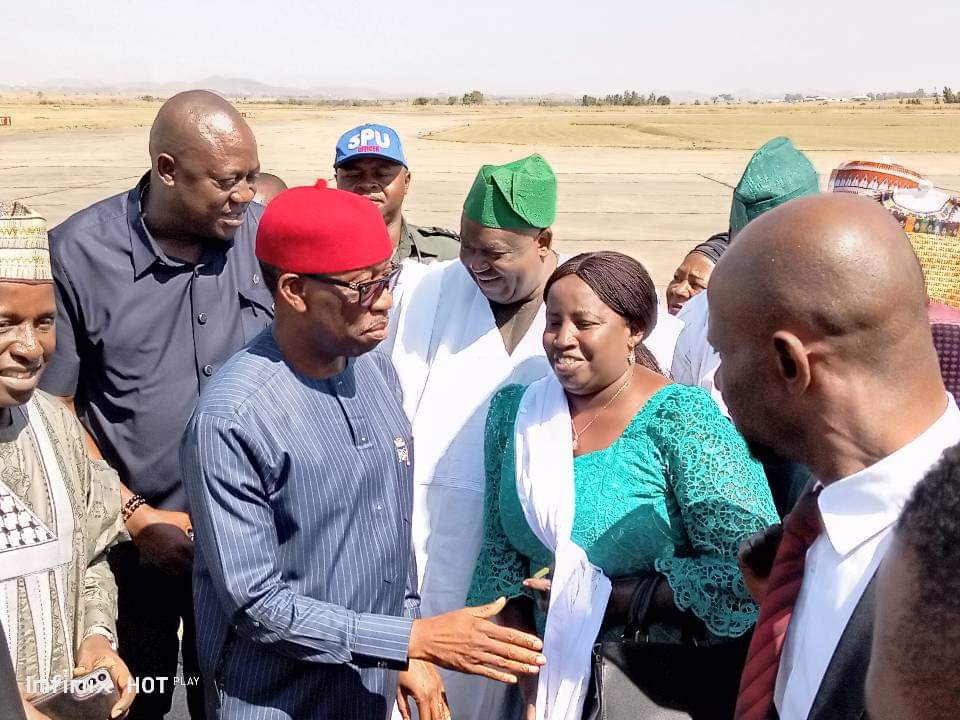 Governor of Delta State and the Vice Presidential candidate of the People’s Democratic Party (PDP) Hon. Ifeanyi Okowa has disclosed if Nigerians elect come 2023 Alhaji Atiku Abubakar as President he will fight insecurity, poverty and revamp the current economic downturn in the country.

Okowa disclosed this on Saturday in Jos during the commissioning of Atiku/Okowa and Mutfwang/Piyo Plateau State Campaign office, located at the Secreteriat Junction, Jos, Plateau State.

“As a party, we believe that working together and carrying along everybody particularly women and the youths will enable us have a landslide victory in Plateau State in February and March, 2023. The battle is not about Atiku or Mutfwang but the battle is about Nigeria and Nigerians.

“The PDP is working round across the 36 states and the Federal Capital Territory with a very promising prospects and by the grace of God, we will win the National elections in Jesus Name.

“I believe that if we continue to move together to the grassroot, to the various local government areas, to the wards and to the polling units where the votes are cast to mobilize the people and ensure that they cast their votes during the presidential, Senate and House of Representatives elections and Governorship and State Assembly elections.

“I want to encourage you all that no matter what we face when we go out to campaign, do not loose hope, no matter what they want to do, exert that authority by mobilizing the people who have the votes for PDP, and when the votes are cast, we will take our people out of poverty, we will be able to tackle the security problems and make sure that we have a secured Nigeria.

“I believe that with the economic reform of Atiku Abubakar, working with Governor Caleb Mutfwang, we will be able to cause our people to rediscover themselves and forget the pass and pursue progress as we move forward.”

Okowa noted that Atiku Abubakar administration will take education of Nigerians very serious, unlike the APC government that has truncated the future of Nigerian youths through persistent strike.

He explained that they will assist farmers through the provision of formidable security and farming input to enable farmers return to farms without being harm.

“Atiku Abubakar was led by God to pick you as the Vice Presidential candidate of the PDP and being the man of peace, you share the same characteristics with His Excellency Atiku Abubakar and in Plateau State under the able candidature of Barr. Caleb Mutfwang and our mother, Josephine Piyo, we are very confident that Plateau State will do again what it has done in the past and to rescue the state after what we have passed through.”

Senator Gyang said the PDP family and Nigerians are eager for good governance in praying and working for the victory of the PDP at the national and state levels.

Plateau State Governorship Candidate of the PDP, Barr. Caleb Mutfwang assured that working together as a united front, Plateau will deliver PDP from top to bottom in 2023.

He appealed to all those who contested the party’s primaries but lost to forget the past and join forces to chase out the APC government at the national and at the state level.

“Today all our differences have come to end, and we march forward as a united PDP in Plateau. It is possible that some people are not fully healed of their grievances, let me on behalf of all the candidates of the party apologize to all of you in anyway that we have failed short of your expectations, please forgive us because it is time for all of us to move on.

“We will do our best going forward to carry everybody along. It is time for us to take responsibility, that you are not just working for Atiku/Okowa or Mutfwang/Piyo but you are working for the deliverance of the people of Plateau State.” He stated.

Former Nigeria Ambassador to Switzerland, Amb. Yahaya Kwande appealed to Plateau people and Nigerians to vote massively for PDP from top to bottom for a united and secured nation.