2023: APC, PDP, others should give Igbo ticket for presidential election in Nigeria — Ohanaeze 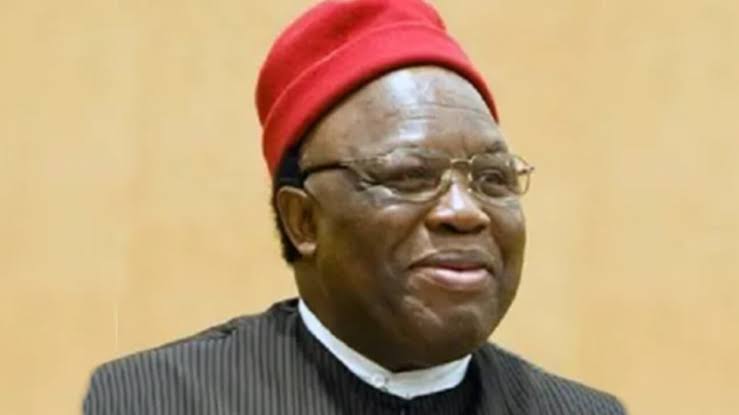 In the next general and Presidential elections 2023, the umbrella body of South East people, Ohanaeze Ndigbo, has asked Peoples Democratic Party, PDP, the All Progressives Congress, APC, and other political parties to zone the presidency to the South East for equity, justice and fairness.

Speaking to journalists yesterday in Abuja, the President General of Ohaneze Ndigbo, Professor George Obiozor, who noted that time is ripe for Nigeria to get a President of South East extraction in 2023, said the talent of Igbo is yet to be fully utilized and maximised by Nigeria.

Obiozor, who expressed optimism that the South East would get the Presidency in 2023, however, warned that many were called, and a few were chosen. It wondered why why people were beaming unnecessary attention on negative issues such as security challenges in the South East because Igbo Presidency had changed from probability to possibility.

Responding to a question on how Ohanaeze Ndigbo would achieve its purpose for an igbo President in Nigeria’s multiparty system, Obiozor said: ‘’We have many politcal parties. We would appeal to them to nominate an Ibo man or woman as their Presidential candidate.

‘’That would do. That would be wonderful. It is found in the Bible, ‘many are called, few are chosen. Politics is a matter of selection. We would sort out ourselves. Just support us, including the press. I am soliciting the press. For now, just support a president from the South East, an Igboman or an Igbo woman.”

The Ohanaeze President General, who stated that Igbo leaders had already started consultations on the realisation of Igbo presidency, said it had been wonderful.

“The results of the consultations are in the papers of day before yesterday, yesterday and even today. Very sound, positive results. Wonderful responses. Have you listened to Edwin Clark or read him? One at a time. None is on the run. ‘’So we are taking it easy. We have given you wonderful example of the support. First outing, tremendous success. You read it, you saw it. Edwin Clark is not a frivolous man. He is a man of history and he is leading a people who have had experience in this country. ‘’In the politics of precarious balance in Nigeria, they have had experience. They know what it takes to support any group and they have done it.”

On political parties he said: “As many as they are, each one of those parties should nominate an Igbo man from the South East. As for who (candidate) it will be, it’s found in the Bible, many are called few are chosen.

“During the last Presidential election, all the major candidates were from the same zone. It was also so in 1999. So why are we trying to break our heads because it is coming to our zone. Give us, our choice will be made by us with your cooperation. That is what the Ibos are demanding. We deserve it and it is reasonable.”

On how the South East would speak with one voice to avoid a plurality of interests and aspirants, Obiozor said: “Other tribes are more divided than us, Igbo are more united. But because all of a sudden there is possibility of Igbo Presidency, some people want to label Igbo a terrorist zone.

‘’I advise the press and ourselves to avoid certain things that are not necessary. Nobody can divide us. This time around, we can get the Presidency from Igbo land. Probability of Igbo Presidency in 2023 has become a possibility.

“Igbo want peace, but not peace of the grave yard. Whatever every other citizen of Nigeria is enjoying, the Igbo need it too.”

According to him, a President of Igbo extraction will bring “capacity, difference and Justice and equity. It is sad that Nigerian does not want to use talent of Igbos. The Igbos are known for their divergent opinions. Is a true consensus possible?’’

Obiozor, who dismissed the claim that South East people were not united politically, said the notion that the zone does not speak with one voice reflects the plurality of ideas by what he termed an egalitarian people which would be harnessed by Ohanaeze.

He said: “Speaking with one voice is dictatorial and undemocratic. We won’t speak with one voice, Igbos will express themselves in different voices which will be articulated by a central leadership that knows.

“For the Igbos having variety of opinion is not a crime, no section has only one opinion on an issue. Igbos have different opinions and they all converge on president of South East in 2023.

‘’No section of Nigeria has one opinion or has one leader. Do we have one opinion in the North East, the North West, even South South. Igbos have different opinions and they converge in Igbo President, President from the South East in 2023. That is the opinion.”

Asked to speak on members of the Indigenous People of Biafra, IPOB, question, Obiozor said IPOB members are their sons that could never be denied.

“We won’t deny IPOB because they are our children, we can never never deny them. They are our people and they must listen to us just as we listen to them. Any area of conflict we will resolve as their father.’’

Responding to questions on the 2014 National Conference, the Ohanaeze President hailed the conference as the best but faulted the refusal of the federal government to implement the recommendation of the conference, describing it as another lost opportunity.

Responding to where the support of Ohanaeze laid between Eastern Security Network and Ebube Agu, Obiozor said: ‘’Believe me, an organization that is working for the security, peace, safety and interest of the Igbos is welcomed. Ebube Agu is formed by the government and governments of the South East.

‘’There is no comparison between Ebube Agu and any other organization. Any organization should come under the control of the government. This question is a very divisive one and we are a people tired of being divided by English language.

‘’Any organization that is fighting for fairness, equity and justice for Igbos is welcomed. If there is a difference, it will be method. It has to be harmonized. As the President General of Ohanaeze Ndigbo, I don’t want any method that puts Igbos in harms way.

‘’That is inimical to our own safety, you get my point. In fact, every group in Nigeria is divided, some even more divided than the Igbos. Look around.

“Until recently, the South East used to be the most peaceful zone. Now all of a sudden, because the idea of a president from Igboland has moved from a probability to a possibility, people want to turn Igboland into a terrorist environment.

‘’Igbos are not nation breakers, we are not violent people. So we must find out the root of the recent spread of violence and Kidnappings and all that. So that is what I am trying to say. People should not use such a thing as the character of Igbo people. For all the things you can know Igbos for, Igbos are not known for getting money through laziness, like kidnapping. You kidnap your uncle, you get money.

“So my advice to the press, do not give publicity to things that do not merit it by comparing Ebube Agu with any other organization that is working in Igboland. Things have hierarchy. The governors of the states are the chief security officers of the states.

‘’So how do you compare them with organizations. Organizations are welcomed if they are working in the interests of the people and the nation. The people we are taking about are our children. They are our people.’’

2023: APC, PDP, others should give Igbo ticket for presidential election in Nigeria — Ohanaeze